A police dog is a dog that is trained specifically to support law enforcement and other police officers. Their responsibilities include:
Police dogs have to remember several verbal indications and hand gestures. The German shepherd, the Belgian Malinois, the Bloodhound, the Dutch shepherd, and the recoverer races are the most frequently used races. Recently, due to their intense drive and attention, the Belgian Malinois the dog of choice for police and military work. Malinois are more petite and agile and have fewer health problems, as are German Shepherd Dogs. A well-known German Shepherd Dog work line, however, is as successful and robust as a Malinois.
​We have dogs available for Police, Special Operations, Military, Detection to include Drugs, Explosives, Phone and Cadaver dogs.

Breeds are German Shepherds, Belgium Malinois, Dutch Shepherds, Labradors, Retrievers, Golden Retrievers, Spaniels, and other working breeds. We offer males and females usually in the age range from 1 to 3 years of age.

K9 Security England provides excellent service dogs trained with the highest standards for the client's needs. We offer single-purpose drug and explosive detection dogs, as well as ual-purpose dogs that detect and protect. We also specialize in dogs for police and special military operations.

Please Contact US and we will help and advise you in any way that we can.
Email:  wayne@k9securityengland.com 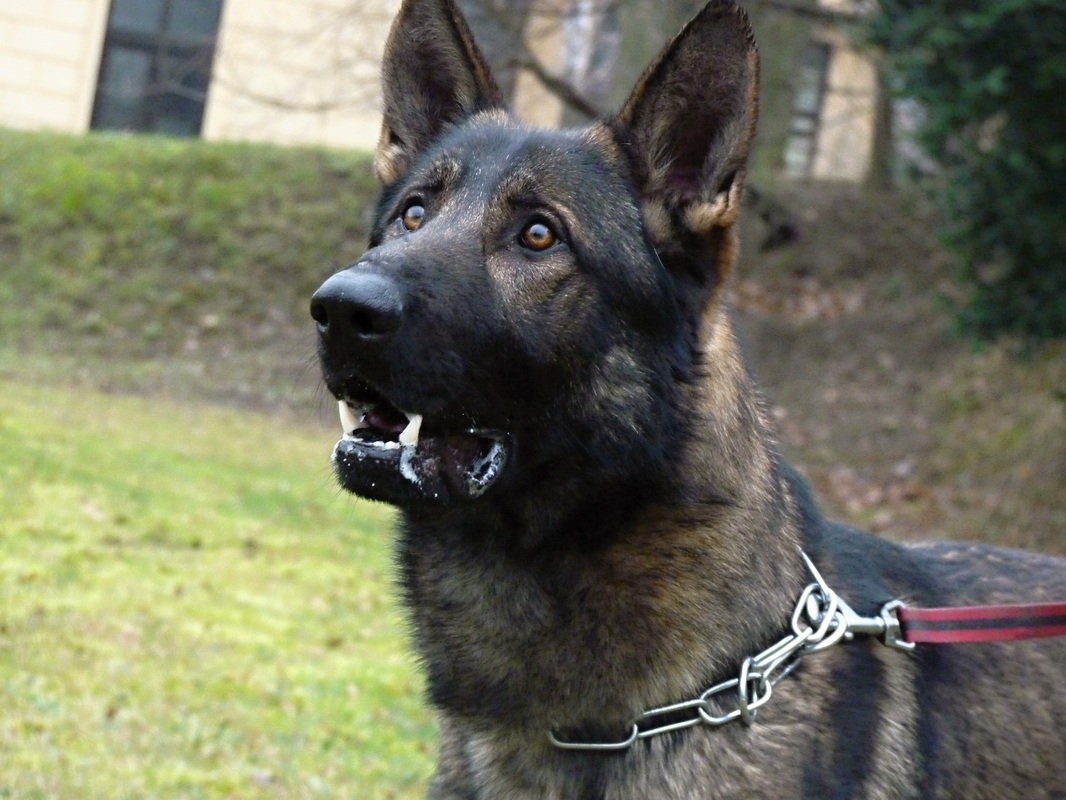 Tiko is a 14 month old German Shepherd. He is a large male. He was imported from Slovakia. He is a very special dog with his unbelievable abilities. He is in training and will be sold as a fully trained Dual Purpose Narcotic Detection Dog. He has a very high drive and loves to work.

In those villages, the wealth and money were dîmed for the maintenance of the parish constable bloodhounds used to hunt down lawlessnesses. Dogs were used in St. Malo in France in the 14th century] In Scotland, bloodhounds used were known as "Slough dogs," which was derived from the word "Sleuth" (meaning detective).

The rapid urbanization of London in the 19th century increased public concern about growing lawlessness – a problem much too big to be addressed by the current law enforcement authorities. Private associations have therefore been established to support the fight against crime. Nightguards were used for guarding premises, and firearms and dogs were provided to protect themselves from criminals.

​Police dogs are trained very lengthily since they start with a canine handler's training. The canine handlers undergo a lengthy training process to ensure that the dog is best prepared. First, before being eligible to transfer to a specialty canine unit, the canine handler must complete the required training and one to two years of experience in patrolling.  This is because experience as an officer allows for potential officers in law enforcement to gain valuable experience. However, knowledge and training outside the police academy are considered assets; this can include obedience to dogs, crowd control, effective communication with animals, accessibility, and personality, as a dog attracts attention to people around it.

For a dog to become a police department, an introductory obedience training course must first be given. You must be able to follow without hesitation the instructions of your handler. It enables the officer to control fully the amount of strength the dog is supposed to use against a suspect. Europe-trained dogs are usually given commands in the native language of the country. Initially, dogs are trained to be fundamental in this language so that the officer can learn new words/commands easily rather than retrain the dog to new commands. This goes against the widespread belief that police dogs are trained in a different language to prevent suspects from ordering the dog against the officer.

The dogs used in law enforcement are either trained for "one purpose" or "two objectives." Single-use dogs are mainly used for the backup, protection, and tracking of personal data. Dual dogs are more characteristic, however. Double dogs do all that dogs do for single-use and either detect explosives or stupid substances.  When a narcotic dog in the US tells the officer that something was found, the officer is reasonably suspicious of finding anything to which the dog (e.g., bag or vehicle) has been alerted without a warrant. The report has been drawn up. The report.

A loud barking dog is helpful in the suspected apprehension and can immediately lead to supposed surrender.

Arrest and Attack Dogs – this dog is used to track, arrest and subjugate suspects sometimes.

Dogs detection – Trained to detect marijuana, heroin, cocaine, cracking cocaine, or methamphetamine, for example. Some dogs have been trained specifically to detect arms and weapons.

Dog for two purposes: These dogs are also known as patrol dogs and skilled in tracking, handling protection, obedience to the leash, criminal arrest, and investigating articles and areas.

Such dogs as search and rescue (SAR) are used to find suspects or objects missing. It is possible to use all the Belgian Malinois, German Shepherds, Golden Retrievers, Labrador Retrievers, and Bloodhounds.

Police dogs will retire in the absence of complete recovery, pregnancy, upbringing, or sickness to continue to work if they are injured. Since many dogs grow up and quit in working environments before they cannot perform, a dog's working life is 6-9 years.

However, in some countries, when police dogs retire, they may have the opportunity to receive a pension plan. In Nottinghamshire, England, police now have a safe retirement opportunity, as government forces are offering £805 for any additional medical expenses over three years. They receive not only a pension plan but also retire and stay with their original handler.

They receive the same honors as their human partners when these dogs are killed as a duty.

DIFFERENT COUNTRIES AND THEIR POLICE DOGS

K9s, for safety priorities such as airport duties, are known to use the Australian Fed and other law enforcement offices.


The Support Group for Belgium Canin is part of the federal police force of the country. There are 35 dog teams, mostly Belgians from Malino. Some dogs have been trained on drugs, human leftovers, hormones, or fire speeds. About a third of these trackers are trained to identify or find living persons. These teams are often used to locate people trapped in collapsed buildings in earthquake areas. The Federal Police Special Units attach the explosive detector dogs.

In 1908, Canadians occasionally started to use police dogs. Until1935, when the RCMP saw the value of police dogs and set up its first team in 1937, they used private dogs. However, they still use personal dogs. The following are the following: By the fifties, the RCMP was operated by German shepherds, Schnauzers, and Doberman Pinschers. The report was published.

Many municipalities in Canada are tracking suspects with dog squads. Most cities in Canada use the bite and hold technique rather than the bark and hold the technical meaning when the dog is being deployed. This often leads to severe injuries and is traumatic for suspects. A dog is legally liable in Canada for the property. Developing jurisprudence is therefore moving towards complete responsibility for handlers of animals deliberately discharged to the suspects. The dog is indeed a gun.

In Denmark, there are 240 active police dogs in group 1, group 2, and group 3, each ranked in one of three groups. Group 1 dogs are highly skilled and experienced. Group 1 is usually used for patroling, rescues, biological research, and major crime investigations and dogs between four and eight years. Group 2 dogs are employed in the same tasks as Group 1 members but are not engaged in the central criminal investigation or biological evidence research. Group 3 for police dogs is the beginner rank and is only used for patrol operations.

In 1949 a Police Dog Unit (PDU) was set up under the direct command of the Special Operations Office and was an expert force of the Hong Kong Police. Its roles include crowd management, search and rescue, poison detection, and explosive detection. Furthermore, the PDU works with other departments to combat crime.

The Dutch Mounted Police and Police Dog Service (Delhi), which supports other units with horse patrols and specially trained dogs, is a member of the KLPD. DLHP dogs are trained to acknowledge a unique fragrance. They specialize in identifying scents, narcotics, explosives, firearms, detection of human remains, location of people drowning, and fire accelerants (identification of the smell shared by an object and person).

In India, the Belgian Malinois has been brought into their K-9 unit, Border Security Force, and Central Reserve Police Forces by the Belgian Navy to support the Cashman border forces by using Rajapalayam as a guard dog.

Many street dogs in the town have been recruited for security training by the Delhi police to provide regional security.